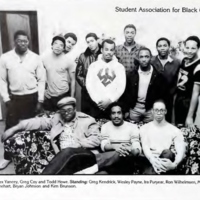 Formed in 1971, five years after the first black students matriculated into Washington and Lee, the Student Association for Black Unity (SABU) since its conception has served to promote the holistic development of the Black/African American/Caribbean American community on campus. SABU has shown extraordinary leadership, demanding W&L to change the habits of its traditionally exclusionary campus climate.

Since the formation of organizations such as SABU, several other black organizations were established to promote service, leadership, scholarship and a dedication to the uplift of black communities.The items in this collection demonstrate the range of black student organizational work: from protesting the unjust treatment of a student by holding a sit-in in President Huntley's office to hosting a Black Emphasis Month with black women as the subject while W&L was still all male, black undergraduates have continuously strived to push the boundaries of our institution in the direction of a progressive and inclusive change.

In W&L's archiving history, pages from the Calyx, Ring-tum Phi, and other miscellaneous items were seldom found together unless they were specifically curated to be hosted next to one another. With these items grouped together, you will have a chance to gain a fuller understanding of this particular history without the barrier of viewing these items in isolation.

Through the 1970s and majority of the 1980s at W&L, the institution was still all male and still predominantly white. Not until 1985 does the university make their decision on co-education. This exhibit intends to trace black student organization from its origin to the present. 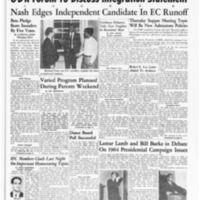 Since its first incarnation as Liberty Hall in the 18th-century up until the early 1960s, Washington and Lee had not admitted any students of color to attend their undergraduate institution. W&L’s 1964 Board of Trustees announcement of non-discrimination came in a moment of national change. The 1960s witnessed the Vietnam War and the Civil Rights Movement, both events to which the nation could not close its eyes. The Civil Rights Act of 1964 prompted action that could not be ignored; in this period, it became clear that if colleges and universities had any hope of moving forward and retaining their status as leaders in education, they would have to integrate or the integrity of their institutions would suffer.

W&L’s Board of Trustees, in hopes of maintaining prestige, released a statement in the Fall of 1964 expressing that “no resolution of the Board has established a policy of discrimination among qualified applicants for admission.” This exhibit will examine several documents involving the faculty, administrators and student body regarding W&L's desegregation.